These are the final five books I selected for my personal top 15 of the year. FYI- I only changed this list about 20 times.

11. Camp X by Eric Walters- One of the older titles on my list. I really liked this book and if I was eleven or twelve I think I would have loved this one. Two boys sneaking around and finding a spy camp during World War 2? What’s not to love. Lots of suspense in the plot that I think will engage young readers. Don’t miss Eric Walters’ note at the end connecting characters in the book to real people in history and probably the most famous spy in literature. I had a student borrow this one over the holidays and I am hoping that we will both really enjoy the rest of the series.

12. Fish by L.S. Matthews- I read this book twice and I think the more times you read it, the more you will get out of it. In the summer, I read this and selected it for my class to hear during Global Read Aloud (GRA). The plot of the book, with aid workers fleeing a war torn country to get to a refugee camp, was perfect for starting discussions on refugees around the world. My students found the book very suspenseful, although they were a little obsessed with trying to uncover the characters gender and nationality at first. This proved to be only one of the many mysteries of this magical little book that is both simple and complex. We Skyped with the author of this book and we found it so interesting to hear about the dreams she had that inspired parts of the book. Her GRA involvement really enhanced the reading experience for my students. I am really excited to join GRA again next year. The other GRA titles I read, The Year of Billy Miller, (although it is really the year of Division 2- just ask my class) and Fish in a Tree were also excellent.

13. The Outcasts by John Flanagan- If you have read his Ranger’s Apprentice (RA) series, this is a spin off in that there are some of the Skandian (a nationality that resemebles Vikings) characters in this series. If you liked that series, you will surely enjoy this one. This book is the first in the series. Just as in the RA, there are a lot of life lessons learned by the lead characters, and they are appealing underdogs. The series is really about these “outcasts” growing up and becoming young men in their society with its emphasis on learning to be a warrior. One of the biggest differences between this series and RA is that there are far more characters introduced in this story and sometimes you don’t get to know them as well as you might want. This is fixed if you read future books in the series (many of which end in cliffhangers so plan to have the next one nearby if that sort of thing bothers you). 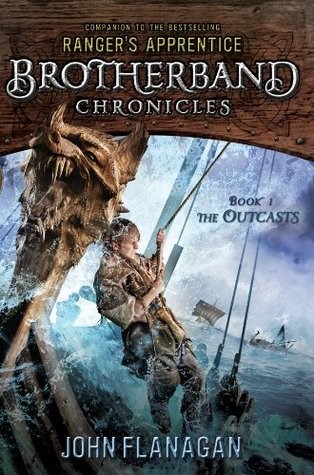 14. The Martian by Andy Weir- Every once in a while it is nice to have someone recommend a book for you and you get something quite different from what you normally read. I got this from my local public librarian who didn’t realize I was asking for a recommendation for elementary school aged kids (at least I hope she didn’t know). This one is a very fast paced, adult science-fiction thriller. If that does not sound like your thing, but you like characters who overcome long odds with their sense of humor and ingenuity, well guess what, it actually is your thing. There was also a bonus to reading this and recommending it to my wife. Once she was done, she raced around “MacGyvering” everything in the house (long story). Ask your Hatchet readers to file this title away for later.

15. The False Prince or A Night Divided (you choose) by Jennifer Nielsen- I actually wanted to pick both, but thought including fifteen authors was more fun. The False Prince, the first book of The Ascendance Trilogy (there is a good word to teach students), is my classes next read aloud. A great middle grade fantasy series, and the plot has many twists and turns that will have my class making lots of predictions and groaning when I stop reading for the day. Sage is an orphan who is competing with other orphans to become part of a clever, detailed plan to take over the throne. He is a fascinating character and it will be fun to see what the students in my class make of him and his view of human nature and his world.

While Jennifer Nielsen is best known for this series and her latest fantasy series Mark of the Thief, she has also written a great historical fiction novel, A Night Divided. This one is about a family that is split up when the Berlin Wall rises up overnight. This book has a really exciting plot and we are using it for the Battle of the Books we are planning in our district. I introduced it to one class in December, and nearly half of them wanted to choose it out of the six books that I previewed.

I cheated and added an extra book, but I left off so many other good books. Feel free to tell me what books I should have read last year and added to the list. I am working on my Must-Read-in 2016 list (a group I found on Twitter through @CarrieGelson) and you may save me from some glaring omissions in that list.