I did not read as much as I have in past weeks, but that was partly due to some travel and I did get to go to two book events. Given that I live three hours from a metro type city, and there is no dedicated book store in my hometown, this is fairly rare. However, I had planned to go to Kazu Kibuishi’s Amulet Day at the Ballpark in Seattle on Sunday for quite some time, and just the other day I noticed that Brick and Mortar in Redmond, Washington was hosting three authors on Saturday. I tried to cram a lot into a two night stay in Seattle (actual non-book related tourism is possible) and we missed some of the Dan Gemeinhart-Laurie Ann Thompson-Ben Guterson chat on middle grade recommendations, but everything we did get to was awesome.

All three authors had great stacks of books that they were recommending and we missed the book talks for the most part but got to chat with all three and see their selections. Pictured here from top to bottom are Laurie Ann Thompson, Dan Gemeinhart and Ben Guterson’s middle grade recommendations at Brick and Mortar Books in Redmond, Washington.

Sunday we got to go the game between the Seattle Mariners and Los Angeles Dodgers. My family contains one baseball fan, me. However, when I showed my kids the details on this event they leaped at the chance to meet one of their favourite authors. We got to the ballpark two hours early to get our Amulet T-shirt, and copy of the first book in the series. Then we got to hear a great talk full of details on his background, and creative process. Next, he painted a landscape scene using Photoshop while answering questions from the audience. Lastly, he chatted and signed with a fairly large crowd. We got books signed for our classrooms, libraries, and homes all with doodles of characters from Amulet. He was very giving of his time taking pictures with people as well. My favourite quote of the day was, “The heroes in Amulet are librarians.” Here is a picture of the Amulet section at Safeco Field. My two children are really enjoying the game as you can see (they enjoyed it more than it appears in this picture but many young people were gazing at their Amulet books during this 12-1 rout by the Dodgers).

On to my reading for the week:

I chose to re-read this whole series before listening to Kazu Kibuishi speak and I just decided to read one each day for a week. I was also hoping Scholastic would ship the eighth one to me as it was in their flyer and I did see it in pictures on Twitter, but they said they would not be able to ship it before the release date. I enjoyed the re-reads and I am really ready for book 8. I think this series gets stronger as it heads towards its conclusion in the ninth book. 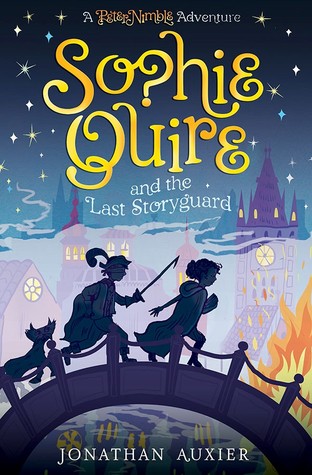 This is a Peter Nimble adventure, the second that Auxier has written although if you haven’t read Peter Nimble and his Fantastic Eyes you could read this book, it would stand alone, but I think one would enjoy this book more if they have read Auxier’s previous books. Sophie Quire is a book mender who is pulled into a battle against an inquisitor who has plans to read the world of “non-sense”, the world’s stories that fill us up with their magic. Peter Nimble is a character from the earlier book, who along with his companion Sir Tode, accompany Sophie on her adventures. I enjoyed this book, but not quite as much as Peter Nimble. For a librarian, I am not usually as entranced by books about books (see Inkheart). 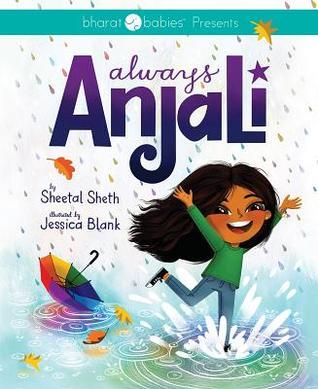 I did really enjoy this picture book about the importance of being represented and having people respect your name. When Anjali can’t get a personalized licence plate with her name on it like two of her friends, and gets teased at school about her name, she demands that her parents let her change it. However, once her parents explain the significance of her name, she learns to value the uniqueness of her name and the way she deals with it is great. The art is very attractive in this book and there are some interesting end pages with more information about how some Indian celebrities have dealt with derogatory treatment about their names. Thanks to Danielle Davis who sent me this book after I won a giveaway on Twitter (she is @writesinLA), 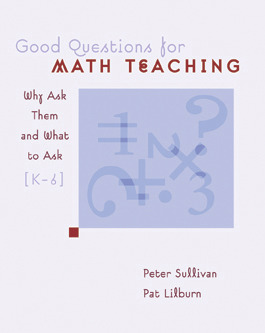 I am finishing Melanie Crowder’s The Lighthouse Between the Worlds, a really interesting science-fiction book, today or tomorrow. My family is over half through A World Without Heroes, the first book in Brandon Mull’s Beyonders series. I have a math professional development book I am reading, and when we are not traveling my daughter and I occasionally find time to read The Mad Wolf’s Daughter, a book I really enjoyed earlier in the year.

I am absolutely reading Jennifer Nielsen’s book Resistance next and I also have two graphic novels Be Prepared and Swing it, Sunny that I am hoping to get to this week. The later will be the sequel that I read this week as I trying to read at least one each week in August. Hope you have an excellent reading week! Thanks for stopping by.