Fall reading has gone very much how I expected it to. With school in full swing it is tough to find as much time to read but there are so many great books out right now that it has always been worth the effort. I didn’t read much the week before last, making it easier not to post, but last week I thought I got to a lot of great books. I might be settling into a two week rotation, albeit unintentionally. When I do manage to post, I really enjoy reading the posts of others and thanks to the women at Unleashing Readers and Teach Mentor Text for hosting this link-up. 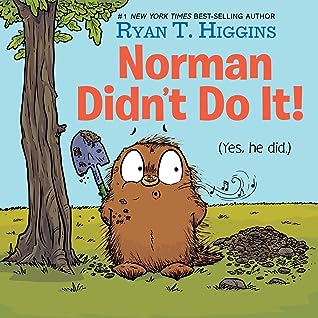 Books from Ryan T. Higgins always seem to be a hit. Of course it all started for us with the Bruce series, but now kids can recognize his illustrations immediately and know they are in for a good laugh. There are always a lot of humourous details in his books, some for the adults more than the kids and this one was no exception in that regard. I also loved the plot, centering around friendship jealousy. Norman the porcupine is best friends with a tree and that goes great until another tree pops up. Norman does not handle it well. I loved the last page, in which he figures out the best way to handle having two trees as friends. 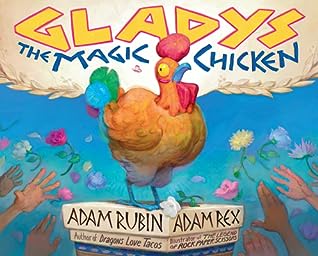 You might know the term supergroup to refer to a music band that contains great musicians from multiple other bands. Almost like an all-star team in sports. I feel like with picture books, we sometimes get that when two different people work together (now I have to try to think of a great prospective picture book superduo). I don’t know of any other collaboration between these two but I have really enjoyed the work that they have done separately. This book is about a chicken that is magic, or is it? The story tells of a chicken that seems to grant wishes, but we might see it as a good chance to talk to kids about cause and effect. I really loved how the illustrations set-up the story’s setting as a fantasy tale. This book will be laid out on shelves tomorrow. 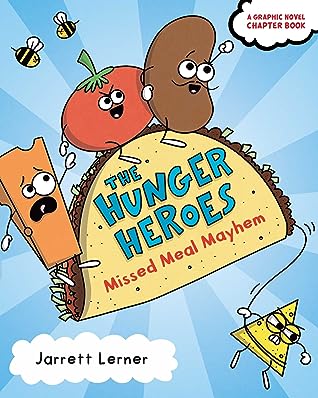 There seems to be something about having food as a main character in a book that often appeals to kids. Just today, in my library we were talking about authors that we had visited with virtually and in-person. This was grade 7, so I was kind of surprised when one of them brought up their favourite author visit, our virtual with Josh Funk about 5 years ago. Food seems to be more fun as a character sometimes than animals that would typically pop up in a book like this. Here, the food is trying to solve the problem of a child missing their meal and having low energy for a test. How to break into the class of a strict, no-snacking allowed teacher? There were many obstacles to overcome. 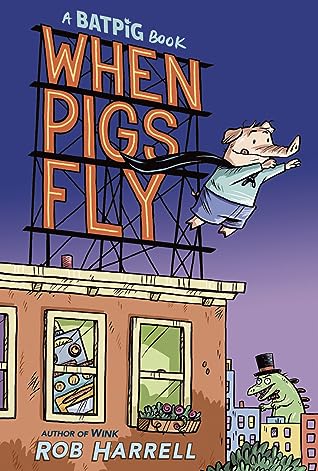 I really loved Rob Harrell’s Wink and Batpig was a character developed by the main character of that novel, Ross. Here we get the origin story of Batpig, and see how his two best friends help him on his journey to becoming a super hero. I really enjoyed this, but I was also trying to imagine Ross developing this because I read that in Wink. This was fun, and I would look forward to reading more of these. 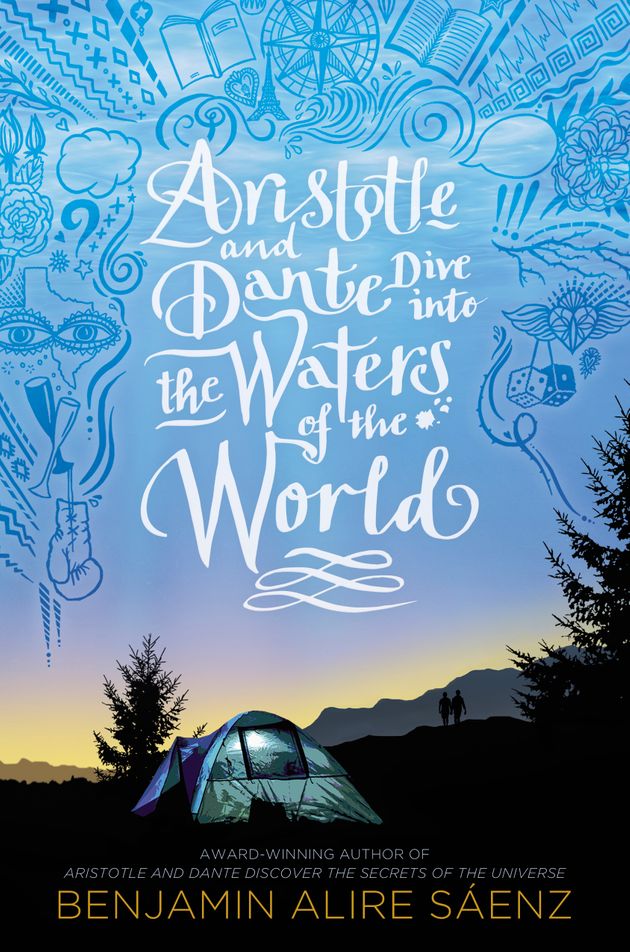 Beautiful writing and all of the feels, as expected in this sequel to Aristotle and Dante Discover the Secrets of the Universe. I have heard this author speak at the Western Washington University Children’s Literature Conference and I could almost hear him in my head as I read this. If you haven’t read the first one, I think you could read this one, but you would be better served finding a copy of the earlier book. I did think it was a touch long, but found it interesting how the setting, placing these characters at the height of the AIDS pandemic, played a major role in the story. 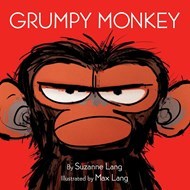 I am really late to the party on this one, I think, but if you haven’t found this series, you might want to give it a try. In this book, our title character Jim Panzee, does not want to admit he is grumpy. He tries to fake it until he makes it but it doesn’t really happen. Eventually, he kind of loses it on his friends and stomps off. It is only after some quiet reflection and then a chat with one close friend that he is able to validate his own feelings and begin to feel better. That doesn’t sound funny, but it is and there are a host of animal characters that help make it so. 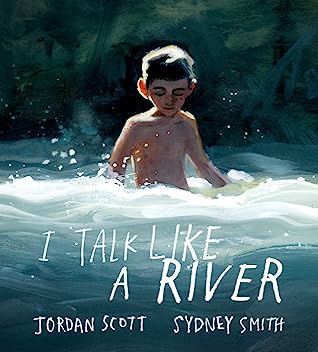 I was drawn to this because the author and illustrator are both from Canada, it looks like it has a connection to nature and it won awards and drew praise from people in this group. Then I learned a bit about the story and knew I eventually had to get it. I finally did, and it is a very interesting story based on the author’s experience as a child with a stutter. His father helped him to support him, in part by using the analogy of his speech being like a river. It is a beautifully told story and the illustrations work very well with it. 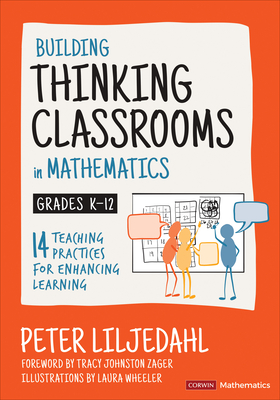 This is a book that is really only for math teachers. I teach 5/6 when not in the library and I basically have Language Arts, Math and PE. My district offered some inservice with author Peter Liljedahl two years ago, and I took it and really enjoyed it. The book goes into far more detail and will offer to completely change the way you teach math. It is all research based with the author trying to change one practice to see if it made a difference and then another and then another, until he had 14 practices that he saw to increase the amount of thinking that kids are doing, in contrast to what he saw as the mimicking action of kids that were engaged in what he called “studenting” (playing the role of a student, but not really thinking). For a researcher, he seemed have a firm grip on what it was like to be in a classroom. Even though there are fourteen practices, and an order in which to best establish them, he invites you to not use all 14. 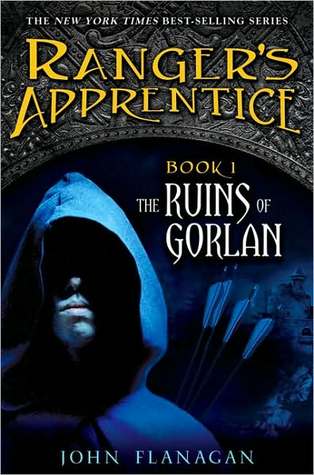 A read aloud I have done with grades 5-7 in the past, this one had several kids asking me to read the sequel, but like most books that you read to the whole class most kids enjoy it, but not all, so I always decline. I did have several borrow copies I have and they are currently enjoying the second of a long series.

The Barren Grounds is my current class read aloud. We are engaged in the Global Read Aloud, reading this book at the same time as other classes and connecting with them about the book (and other elements of culture) through a video app called Flipgrid. I have been connecting with a class near St. Louis for about two weeks and this week we are adding a contact from South Australia. We are really excited to see how our three classes view this story. The Amulet of Samarkand is our family read aloud right now. We enjoyed the first quarter, I love the reading the character on the cover, Bartimaeus. I got an e-ARC of Hunting by Stars, the second Marrow Thieves novel, and it is great so far. The only problem is that I have to read it on my laptop, my least favourite device to read from. Not sure why it does not work on my tablet, but it is still worth it. However, when I leave the house, it is not the book I grab, so it is going slowly. Teaching These Days is a book the administration in my school District has encouraged (maybe should use a stronger word there), and so far we have been told we should be prepared to discuss a chapter at each staff meeting. That item did not make it to the agenda of our first meeting and now I pretty much forget what the first chapter said. I know the author wants teachers to reconnect with their passion. I would rather my District help me find more time for mine than give me this book to read, but… hey a free book can’t be that bad, right?

I will probably be reading one of these two books when I don’t feel like hauling my laptop around to read Hunting by Stars. I just got a nice shipment of books that included several MGs I have been waiting for including R.J. Palacio’s Pony (that one got signed out), and so I am hoping not to read as much on devices and more books over the next two weeks. Thanks for reading my post this week. It was super late, almost Tuesday Eastern time, but I am in the Pacific zone so this was really the best moment all day for me to write this. Looking forward to catching up with others and seeing how their reading went last week.