This was a great week in many respects. We finished the week by getting lots done in our yard and garden, and even better, we opened the week visiting my parents. My family hasn’t travelled out of our small community since the pandemic started. We pretty much only had contact with others for shopping since my wife and I finished teaching at the end of June. We decided we would quarantine for 14 days and then visit our parents, first mine and later this month her parents. They don’t live too far away so we can easily make the journey in a morning without having to stop anywhere along the way.

All of this made for a bit of a light reading week, but seeing family for a few days was very important. Although, my reading plans did change I did really enjoy a few novels this week and thought I would share them with our wonderful reading community. Thanks to Kellee, Ricki, and Jen for continuing to host this link-up. 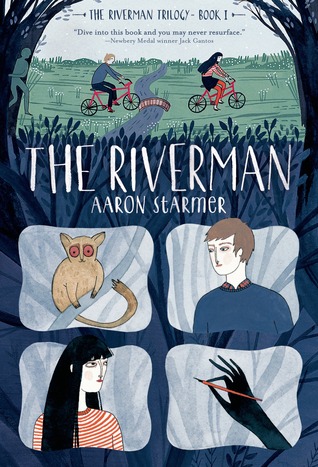 My family and I finished this odd, and disturbing beginning of The Riverman Trilogy. This was a re-read for me. I really like this one, but it is an upper MG book. I usually find one student who will read this every couple of years, and those that like it, like it a lot. They usually harass their friends until they agree to read it, because it is story that needs to be discussed. It is kind of difficult to explain without spoilers but readers are often trying to figure out what is real and what is not. Characters are often quite mixed up as well. Anyways, this year, my daughter was the student that read it, and she could not wait to hoist it on to my younger daughter and my wife to see their reactions to some of the squeamish parts.

I haven’t said anything about the plot. Well, there is a girl, Fiona, who travels to a world called Aquavania (by touching a certain bit of water). She controls everything in the world through her imagination, and then she discovers other worlds connected to hers that are controlled by other kids. Then, she finds out that some of these other kids are going missing in both Aquavania and the Solid (real) World. And she feels it is at the hands of someone known as The Riverman. She enlists her neighbour Alistair to help and we become embroiled in confusion along with him. Is Fiona making this up? Is it a cry for help? Is it real? I had to read all three of these books to get as many answers as possible, but alas for my poor wife, who wanted to do the same, it was my youngest’s pick next and she went another way. 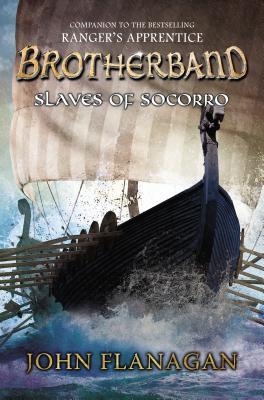 My children sometimes cannot understand why I do not just read from the beginning of a series to the end as they often do. I tell the that I am trying to read widely so I can recommend a range of books to a range of readers. They kind of get it, but this summer they have a list of series they feel I should back to. We noticed I had stalled after reading book three in a number of different series, and we agreed that I should read book four in at least three of them. This is the second. The Brotherband Chronicles is actually a spin-off of John Flanagan’s Ranger’s Apprentice books (and there are 12 of those, and then some prequels, and books that take place years later). They are entertaining, full of good relationships and witty banter. They take place in an alternate world that medieval in nature. The Heron Brotherband (a crew of a wolfship) is a group of Skandians (think Vikings) who work together as a team. In this case, they are sent by their lord to police the coastline of neighbouring nations as part of a peace treaty between Skandia and its neighbours. The crew was known for being a group of outcasts in their youth, but the strength of this series is how they come together by using their strengths, and work together to accomplish their missions. I find many of my students to enjoy Flanagan’s earlier series, but only a few make it this far into his catalog. 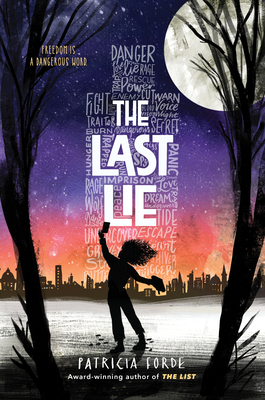 This is the second in the duology that started with The List by Irish author Patricia Forde. The books have alternate titles in Ireland (The Wordsmith and The Mother Tongue). In these books The Melting has caused most of the world to flood. After the waters recede a little society is slowly reborn in a world that is much more difficult to inhabit. In a land that becomes known as Ark, the leaders decide that humans messed things up really badly with climate change. The answer for them is to simplify life so those mistakes are not repeated. So, they restrict language, art, and culture and create a society where obeying a totalitarian government is key. Letta worked for a Wordsmith in the first book, the person who gives out the language that each person is allowed to learn, on cards. Now, she fights against the ruling group and wants people’s personal freedoms to return. Her companions tell her that the greatest mistake is to stop trying, and she feels that humans can be more careful with their words and actions to create a better life. The book’s expected release in North America is on August 1.

My youngest picked The Blackthorn Key, which she knows that the rest of our family enjoyed a few years ago. I really enjoyed re-reading the first fifty or so pages this week. It is a story of an apothecary’s apprentice in the 1600s. Christopher gets embroiled in a murder mystery. Last week, I was sure I was going to start Dig after writing in this space, but I thought it would be a book I really want to delve deeply into and that is sometimes hard when travelling, so I left it for this week.

I have the this ARC from the Rick Riordan Presents imprint and it is a new author to me, so I am going to try it. I think it is based on a Mexican folktale. I am having a hard time sticking to plans lately, so that is probably enough for me. Thanks for checking out what I have been reading, I hope to see what others have been up to as well later in the week.